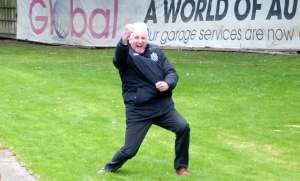 Marine progressed to the FA Trophy 2nd Qualifying Round as they overcame Tadcaster Albion at Ings Lane.

Manager Neil Young made three changes to the side which prevailed at Frickley in midweek, James Joyce, James Barrigan and Niall Cummins being restored to the starting eleven in place of James Ellison, Kenny Strickland and Ryan Wignall.

On a chilly Autumn afternoon but with an immaculate playing surface beneath their feet, both sides sought to assert their authority on proceedings in the early stages.

The Mariners, sporting their rather dapper two-toned blue away kit, made the early breakthrough with just seven minutes elapsed. James Joyce’s novel cross to the far post found Mikey Howard whose header in turn found Niall Cummins. The skipper took a touch on the penalty spot before finding Howard who was perfectly positioned to sweep a first-time left-footed finish beyond home custodian Ingham.

The lively Mo Touray was next to threaten for the Crosby club as his skilful run took him to the byline, but his attempted pull-back towards Cummins was diverted by an outstretched Albion limb and cleared.

The home side steadily found their feet in the tie and a shot from the edge of the Marine area was directed straight at Bayleigh Passant who held securely.

However the Tadcaster equaliser arrived midway through the opening period as neat build-up play from the homesters saw a ball slipped through on the right-side of the Marine box to Santos, the winger squaring across goal for Russell to turn the ball home at the far post.

Marine continued to look lively in an attacking sense and Neil Kengni’s low drive from just inside the home area was gathered by Ingham at the second attempt. Cummins then found Howard once more, the ex-Morecambe winger cutting inside onto his left foot but his daisy-cutter failed to trouble Ingham.

Following the Tadcaster goal, the homesters had enjoyed a spell of superiority without testing Passant, but the Mariners quickly re-established their authority and found a second goal in the 37th minute.

The energetic Kengni’s weaving run was ended by a crude challenge from home centre-back Evans, who was cautioned for the foul. Josh Hmami’s delivery from the resulting free-kick was as react as it had been at Frickley on Tuesday evening, this time the midfielder’s ball found Cummins goalside of the defender to steer a header past low past Ingram.

Just before the break, Tadcaster were reduced to ten men as left-back Rogerson firstly produced a strong but fair challenge for a loose ball five yards outside the home penalty area, however his follow-up lunge with studs showing caught Hmami, leaving referee Gough little option but to dismiss the Albion player.

The second half saw Marine in the ascendancy with their numerical advantage, at times appearing to open up the Albion defence at will through the excellent “front four” of Cummins, Howard, Kengni and Touray.

Four minutes after the restart Cummins slipped a ball through to Touray who, as at Frickley’ did everything right before the finish, creating space to shoot but unfortunately blazing the ball high over the bar from the corner of the six-yard box.

At the other end Russell tried his luck from 22 yards but his wayward effort failed to trouble Passant, before continued Marine pressure saw David Raven volley a loose ball a yard or two wide of target following a corner.

However the Mariners managed to double their advantage on 62 minutes, following another swift attack. Kengni broke forward and played the ball to Touray on the right-hand side of the home area, the young striker’s drive being denied by Ingram’s boot but captain Cummins arrived to slide the ball home from six yards to the delight of the travelling Mariners.

Marine’s play should have yielded further reward with a quarter-of-an-hour remaining, as Howard raced clear of the beleaguered home defence, but couldn’t apply the finish as Ingham made a fine stop low to his left.

Tadcaster’s trio of substitutes had a favourable impact on their side’s attacking prowess, as Sanyang fired in a low shot from the edge of the area which the well-positioned Passant held securely.

Sanyang then forced Passant into a smart save with a fierce strike which the young ‘keeper palmed over his crossbar, after Ofoegbu had escaped Danny Shaw’s attentions just inside the Marine half.

Marine continued to threaten in the closing stages without creating any clear-cut chances of note, as time elapsed to complete a well-deserved victory and hand the Mariners a home tie with Mossley in the 2nd Qualifying Round.