Pitching In Northern Premier League Marine announces that they are to absorb ticketing agency fees for all future games including the rearranged Colne FC league game to take place this coming Tuesday. Club officials have made the decision following a survey by them of non-league clubs’ ticket pricing revealed that the majority absorbed ticketing agency costs in setting admission prices for their fans.

The new ticket pricing policy was implemented successfully for the first time at last weekend’s Emirates FA Cup game against Warrington Town at the Marine Travel Arena. The Colne FC game was originally scheduled to be played on Tuesday 24th August but was postponed due to Colne’s involvement in an Emirates FA Cup replay on that date.

Marine’s attendances so far this season have been impressive, with an average of over 1,000 attending each of their four home games including 1,003 at the Warrington Town game last Saturday.

New ticket scanning technology installed by the club has allowed for quicker entry of spectators through the turnstiles, assisting operators in dealing with the increased numbers entering the stadium including the 430 season ticket holders, an increase of 180% on last season.

Club officials therefore continue to request that fans purchase their match tickets online in advance of arriving for the game to help avoid any delays or congestion in the approach to the stadium entrances prior to kick off.

Adult tickets for the rearranged Colne FC game on Tuesday cost £10. Concessionary tickets for retired citizens (aged 65 and over) and for students in full-time education cost £6. Junior tickets (aged 12-16) cost £3, whilst children aged up to 11 have free admission only if they are accompanied by an adult who has purchased a match ticket.

Tickets for the game against Colne will be on sale from 6pm today (Thurs 23rd Sept) and can only be purchased using the link:

Should any of the small number of supporters who had already purchased a ticket for the Colne FC game when they briefly went on sale in August wish to claim a refund of the ticketing fees paid, please email sales@marinefc.com

Fans entering the stadium must provide their e-ticket or printed ticket which will be scanned on entry at gates 1 or 2 on College Road, or at gates 5 and 6 adjacent to the club entrance which will also be open to accommodate the extra number of spectators that are expected to attend the game. All gates will open at 6:45pm at which time the Arriva Suite and 1894 bar can be accessed for refreshments and snacks.

“It is important that we take on board fans’ opinions with regards to ticket pricing and the inclusion of ticketing agency fees. The survey carried out confirmed we were in the minority and we therefore decided to implement the pricing change without any delay. The feedback from several fans attending the Warrington Town game was positive to the pricing change made. Our attendances continue to be very good with spectators benefitting from the use of the scanning technology at the turnstiles avoiding delays entering the stadium”

“I look forward to meeting the players, staff, officials, and supporters of Colne FC at the Marine Travel Arena on Tuesday in what will be another tough league game as we bid to improve on our league position.” 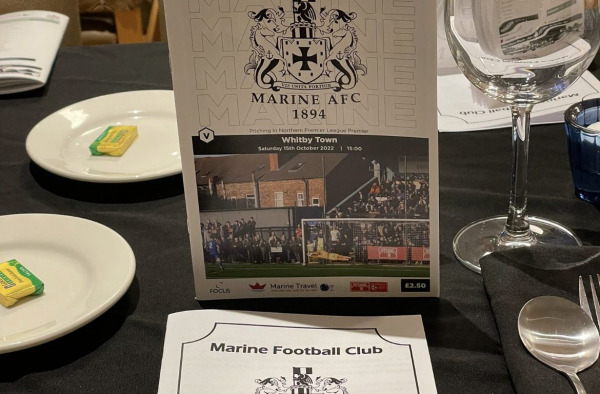 Marine intend to run a supporters' coach to Morpeth Town on Saturday 5th November for our NPL Premier fixture.…