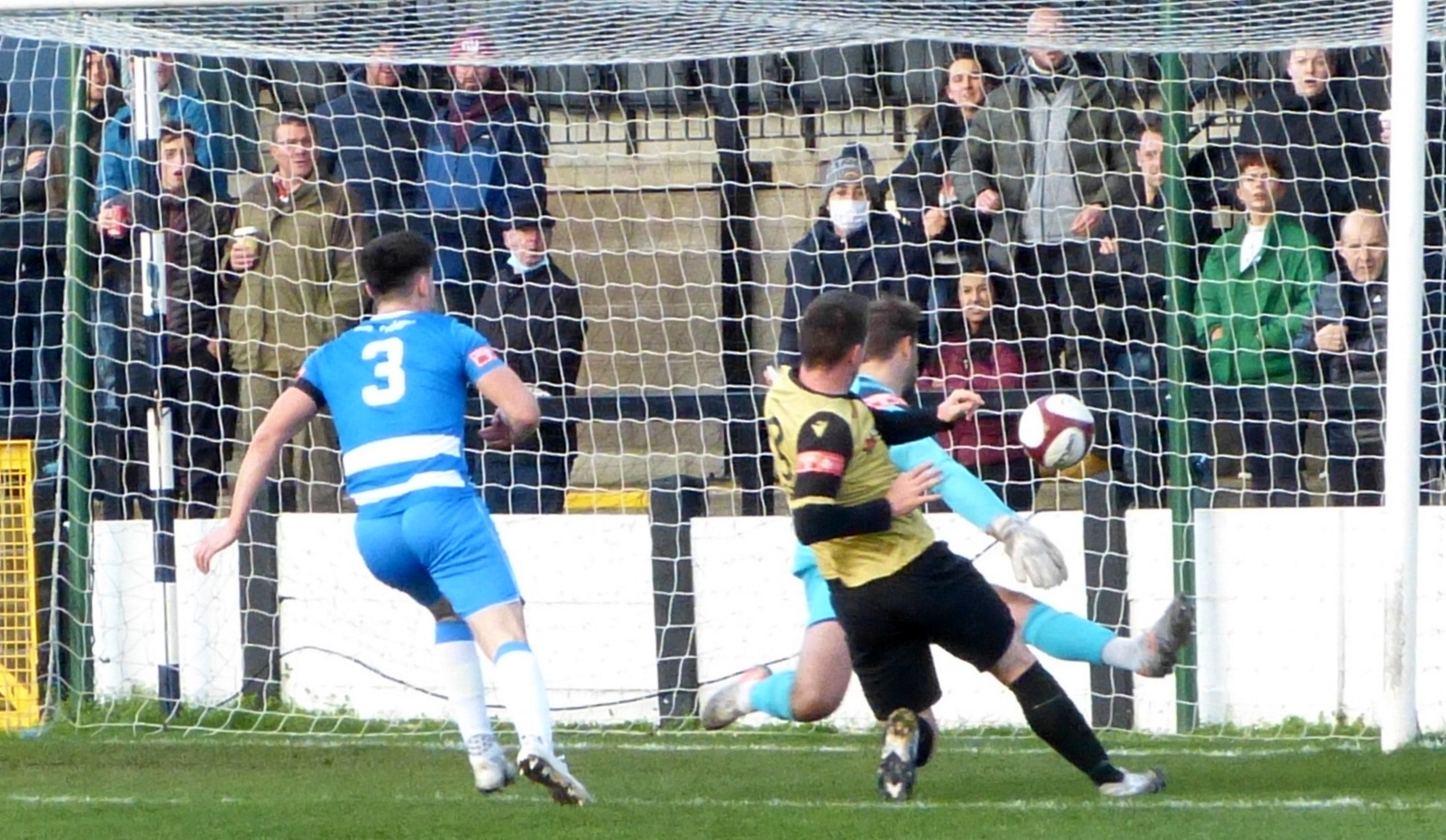 Marine progressed to the First Round of the Buildbase FA Trophy to make it eight wins from eight in cup competitions on Saturday afternoon.

There were a couple of familiar faces in Stalybridge colours, with former Marine first team coach Ian Johnson returning to the MTA as visiting assistant manager and on-loan James Ellison in attendance but cup tied for the game.

Marine had the better of the early exchanges, and Josh Hmami almost sent the Hmami army into early ecstasy on 13 minutes when his corner almost curled into the net following some wing work from Neil Kengni.

Niall Cummins opened the scoring for the Mariners on 17 minutes with a close-range rebound after efforts from Hmami and Mo Touray were blocked.

The visitors pushed back with some pressure of their own, as David Raven appeared to be struck in the nether regions by a Scott Sephton shot before play resumed rather appropriately with a dropped ball. Raven responded with wit on Twitter later on, saying the ball actually hit him in the head but it wasn’t the first time that the two had been confused.

Kyle Hawley bagged the equaliser for Celtic on 36 minutes when his strike from the right of goal slipped under Bayleigh Passant.

The Mariners came back strong, Kengni and Touray both going close as they looked to nip ahead before the break.

They did exactly that with virtually the last kick of the half, when Anthony Miley nicked in at the far post to poke in a Hmami free kick and make it 2-1 at half time.

Stalybridge grabbed another equaliser just three minutes into the second half though, when Jon Ustabasi swiped the ball past Passant from just inside the box to complete a fluid attacking move for the visitors.

Captain Cummins restored his side’s lead on 63 minutes with another rebound, after Freddie Sass blocked his initial shot. At the second attempt, Cummins showed his class from a Kengni pass by defying Sass who lay helpless on the grass.

Marine didn’t take their foot off the gas, and after an off-the-line clearance from Raven, they won a penalty on 70 minutes when Josh Solomon-Davies was pulled down in the box. James Barrigan stepped up and sent the ball low to the goalkeeper’s right, but Tom Stewart got down well to save.

Stalybridge were by no means finished, and won a penalty of their own deep into stoppage time when Passant committed a foul in his box. Ustabasi was given the chance to take the tie to penalties with a spot-kick at the end of regulation time, but blazed the ball over the crossbar. Marine saw out the win in a nervy last few minutes to progress to the next round.

The Mariners now turn their attentions back to the Emirates FA Cup, with a huge First Round tie on the horizon against Colchester United next Saturday 7th November at 3pm behind closed doors, live on BBC Red Button.

Marine or Bradford (Park Avenue) will entertain FC Halifax Town in the 3rd Round of the Buildbase FA Trophy,…