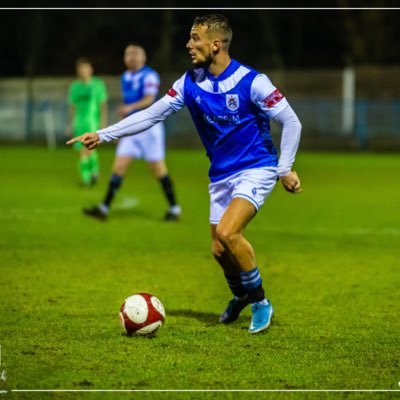 Marine AFC are pleased to announce the signing of attacking midfielder Callum Harris on contract for the 2022-23 season.

Callum, 26, joins from Stalybridge Celtic with whom he spent the last two seasons, having started his career in Manchester City’s Academy at the age of 16.

After his time at City, he moved on to Blackburn Rovers under-18s before signing with Wolverhampton Wanderers under-23s, while also enjoying a stint at Nike academy.

He has also played abroad in both Spain and Belgium in recent times.

Speaking to the Northern Premier League after joining Stalybridge he said:

“My time at Manchester City was one I really enjoyed and it instilled a lot of elements in my game that are still with me today.

I did my scholarship at Blackburn and I was there for two years. That was a time of change as I had to move away from my family, but it’s one that I look back on as an experience that I needed to have to grow as a player even though it didn’t go as well as I wanted it to.

I then moved onto the Nike academy which was an excellent organisation to say the least, everything about it was A* professional from training facilities to staff. I stayed there for eight months before earning myself a pro contract at Wolves.

I was at Wolves for two seasons with the under-23s and I did enjoy my time there as I gained some good experience training alongside players who were top quality all over the field.

I then moved over to Belgium through an English contact who was partnered with the owner of Patro. I played for a season and did well playing consistently in front of a good fanbase and gaining some valuable experience as a first team player. The level was a lot higher than I initially expected.

I then moved from Patro to Burgos CF in the Spanish third tier. That was a complete different experience as I had to learn a whole new language which I enjoyed a lot.

The level of football was very good but after just six months there, we came to an agreement to cancel my contract as I was becoming a father, I expressed to the club my will to return back home to England and be closer to my family which I am thankful they fully understood. I came back to England just before lockdown and joined Stalybridge.”

“Callum is very good technically, particularly in the final third and will give us a real goal threat.

He has good experience in this League and I’m looking forward to him joining us.”