A 20-minute Niall Cummins hat trick helped Marine on their way to a 3-1 win over bottom-placed Market Drayton Town during a blustery afternoon in Crosby.

Neil Young made three changes to the side that won at City of Liverpool one week ago, with Ryan Wignall, Niall Cummins and George Newell coming in for Alex Doyle, Owen Watkinson and Lewis Reilly.

Unlike last week, Marine had the wind behind them in the first half and looked to use the conditions to their advantage.

The opening goal of the match came after just six minutes, as James Barrigan’s outswinging corner was met at the far post by Dean Winnard, who played the ball back into the danger zone for Cummins to tap in.

Marine passed the ball around excellently in the first half, exploiting the wide areas through wing backs Ben Hughes and Neil Kengni. Both had an excellent game, with Kengni in particular threatening consistently.

And it was through Kengni’s attacking prowess that led to the second goal.

The Mariners’ top goal scorer drove into the penalty area, getting the better of Cameron East and unleashing a low strike on goal. ‘Keeper Ashley Rawlins saved the original effort, but Cummins was on hand with a poacher’s finish to make it 2-0.

Cummins completed his hat trick with a well taken half-volley in the 20th minute, using his body well to shield the ball into the box and finding the bottom left corner once again, taking his league tally to nine for the season.

The Lilywhites had further chances to pile misery on the away side, as Newell saw his effort blocked and Mark Howarth was unable to steer his header on target.

At the interval, Marine were 3-0 up and cruising, having limited Market Drayton Town’s sight on goal, taking full advantage of the stormy conditions.

Ten minutes into the second half and the Gingerbread Men were reduced to ten men, as Angelo Franco’s poor two-footed challenge left referee Jonathan Wyatt with no choice but to give the number eight his marching orders.

In the 65th minute, the visitors managed to pull one back in bizarre fashion, as Rawlins’ drop kick from inside his own penalty area bounced over Aidan Dowling and struck the back of the net. The goalkeeper’s celebrations were muted, but this passage of play demonstrated just how much of an affect the wind was having on proceedings.

Despite a flurry of chances for Marine, who now had a numerical advantage, the score remained at 3-1. Winnard, who had set up the first goal of the afternoon was unfortunate to not get his name on the scoresheet, while Newell’s near post flick goalwards was kept out by Rawlins.

Full time and job done for Marine, who have now won each of their last three matches, scoring nine goals in the process. Next up is a trip to Runcorn Linnets, who are currently fifth in the NPL West.

Marine will entertain Dunston at the Marine Travel Arena on Saturday 13th November (3pm), following today's draw for the… 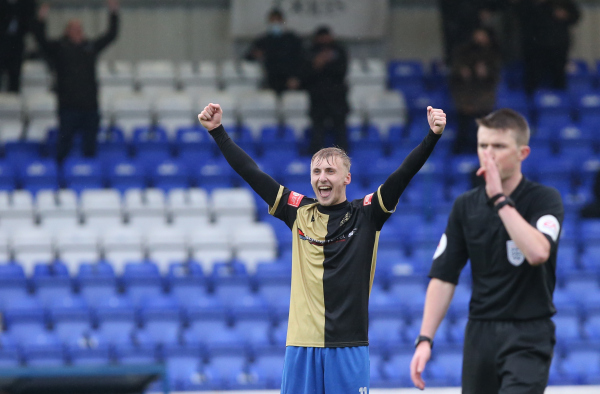 Baz back at MTA next season... Marine AFC are pleased to announce that midfielder James Barrigan has signed a…