Second half goals from Mark Howarth and Niall Cummins earned Marine a 2-1 win over Trafford, with Bayleigh Passant saving a penalty just before half time.

Team news saw Mark Howarth step back into midfield, as opposed to the defensive role he has occupied in recent weeks. James Barrigan made his comeback from injury, with Niall Cummins also returning to the starting 11.

The home side started brightly, zipping the ball around quickly on the skiddy surface. Howarth gave Trafford’s goalkeeper Matthew Cooper an early save to make, as his long-range effort needed stopping.

Owen Watkinson had an early shout for a penalty, as he felt he was illegally nudged off the ball whilst trying his luck inside the area, but referee Callum Jones disagreed.

Despite an onslaught of Marine pressure, the Trafford defence stood strong, with Cooper making a couple of decent stops, as well as his defence throwing their bodies on the line to block several shots.

Against the run of play, it was the away side that took the lead. On the counterattack, Matthew Barlow found himself in space one-on-one with Bayleigh Passant, but scuffed his shot. Luckily for the North, the ball fell into the path of ex-Mariner Max Hazeldine to open the scoring.

And things could have been even worse for Marine at half time, as Howarth brought down Connor Hughes inside the penalty area, gifting Trafford a penalty. Barlow stepped up, looking to double his sides lead, but Passant was equal to his effort, palming the ball into safety.

At the break with work to do, the Mariners performed impressively for most of the first half, with Hazeldine’s counterattack goal the difference maker so far.

The second half began in a similar pattern to the first, with Marine enjoying the majority of possession and creating goal scoring opportunities frequently. Neil Kengni and Watkinson both looked lively, but either saw their efforts blocked or fly wide of goal.

On the hour mark, Marine finally breached the seemingly impenetrable Lancashire defence, through a spectacular curling effort from Howarth. Having controlled much of the first half’s midfield battle, Howarth stepped up to score his first goal of the season and level the scores.

Soon after, the comeback was complete. Ryan Wignall found space inside the box to the right of goal, cut onto his left foot and swung the ball goalwards. Captain Cummins stooped low to fire his diving header past Cooper, marking his return to the starting 11 with a goal.

Passant was called into action more frequently as the half went on, as Trafford began to attack with more impetus. The pick of the bunch saw Marine’s number one keep out Barlow’s effort from the edge of the box, capping off a Man of the Match performance.

As the game drew closer to the end, the Marine defence must be credited for their solidity despite an increase of pressure. Dean Winnard, who had replaced the injured David Raven in the first half, put in a mammoth performance at centre half, winning duels both on the ground and in the air.

Full time and yet another win for Marine, making it six wins from the last nine games in all competitions. This result puts the Mariners just one point behind league leaders Mossley, with a game in hand.

Next up for Marine is a trip to Market Drayton Town this Saturday. 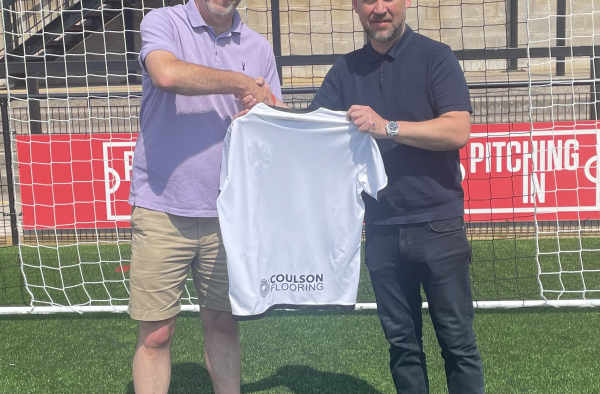 MARINE ANNOUNCE COULSON FLOORING AS “BACK OF SHIRT” SPONSOR

Marine are pleased to announce Coulson Flooring as "back of shirt" sponsor for the 2022/23 season. Andy Coulson is…