Marine suffer their first defeat of the season courtesy of a last-minute goal, as they lose 2-1 to Stafford Rangers on Tuesday evening. Despite taking a second half lead through captain Josh Wardle, a second yellow card for debutant Joe Ferguson inspired the hosts to turn the game around. Jack Baxter and Kaiman Anderson both got on the scoresheet, sending Neil Young’s side down to 11th in the Northern Premier League.

A lively game at Marston Road saw almost 800 spectators attend the fixture. They witnessed the Mariners pose more of a threat throughout the first half; Jake Burton narrowly missing the target from a tight angle inside ten minutes.

An early stoppage for Callum Harris meant he was forced off with a suspected muscle injury and replaced by Hayden Campbell.

Though the home side did have the ball in the back of the net just after the hour mark, but a clear foul on Bayleigh Passant kept the score at 0-0.

Marine had two great opportunities to go ahead before the interval. The first from Alex Doyle who attempted a half volley from the edge of the box, his effort whistled over the bar. A couple minutes later Josh Solomon-Davies picked out Campbell who was free inside the box, but the forward placed his shot scarcely wide.

The second half started similar to the first, as Solomon-Davies limped off the side of the pitch adding another problem for manager Young.

Stafford skipper Tom Tonks had a strike come off the post soon before Ferguson collected his first yellow card, with words being exchanged from both dugouts.

Nonetheless, it was Marine who took the lead. A quickly taken free kick allowed substitute Mo Touray time to put his cross into the box, which Wardle took full advantage of; his header nestling into the far corner.

But the visitors’ celebrations were cut short, when Ferguson was awarded a second yellow card in quick succession, that spurred up the home crowd.

Their momentum around the ground was soon inflicted onto the pitch, when Touray was dispossessed in a dangerous area, the ball falling to Baxter whose strike from long range gave Passant no chance.

Stafford’s set-pieces looked their most dangerous attacking option all game, and in the last few seconds, they made one of them count. The ball was sent towards the back post where Anderson got the final touch. It was a devastating blow for the Mariners, that will feel hard done by in Staffordshire.

Marine will be looking to bounce back on Saturday, when they host top of the table Marske United for a 3pm kick off at the Marine Travel Arena. 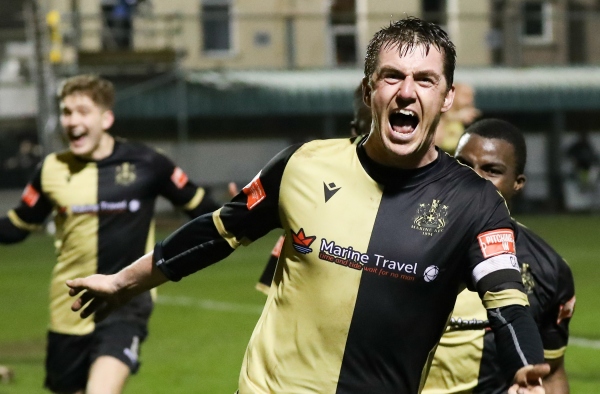