The club have received the following communication from NPL Chairman Mark Harris:

The board of the NPL met last night (Thursday) to review several matters which I am pleased to summarise below.

2020/21 season outcome
As was announced on Wednesday, the FA’s Alliance and Leagues Committees have reached a consensus that the 2020/21 league season for Steps 3-6 of the NLS be curtailed immediately.
The Prime Minister’s statement on Monday made it clear that football at our level of the game cannot resume before 1st April. Clubs’ responses to the recent survey provided a clear mandate.
 77% of clubs across Steps 3-6 (62% of Step 3 and 4 clubs) wished to curtail the 2020/21 league season if could not be completed until after 1st April.
 16% of Step 3 and 4 clubs favoured re-starting the 2020/21 season in August.
 22% of Step 3 & 4 clubs favoured other solutions.
There was little appetite for extending the 2020/21 league season beyond the end of May 2021 due to the financial implications, expired player contracts and having to schedule the 81% of matches at Steps 3 and 4 not completed.
The National League clubs have voted to continue at Step 1 but to terminate the season at Step 2. It is a matter of public record that the latter outcome is the subject to legal challenge so there will be a delay before the final outcomes are known. Whatever that is, it will not affect the NPL.
In summary, the decision to curtail the season means there will be no promotion or relegation between Steps 3 & 4 this season; no promotion to Step 2 or relegation to Step 5.

Why ‘curtailment’?
The season has been curtailed rather than declared Null & Void to enable data from 2020/21 playing records to be used in the future, should we wish/need to do so. Doing the same with 2019/20 results is less straightforward because those results were expunged.
We have requested urgent clarification from the FA as to when player contracts now expire, whether the contract extension window has changed and when non-contract players become free agents.

Games during April/May
Some clubs have expressed interest in arranging some form of mini competition during April and May, even though no spectators are permitted until mid-June at the earliest. There are other issues such as player and referee availability and the risk of insurance being invalidated by participating in
fixtures un-sanctioned by County FAs.
The board considered staging the League Cup during April/May on an opt-in basis but concluded that allowing such a competition without paying fans and bar income would be inconsistent with the stance taken on fixture resumption by the Trident Leagues to date.
If clubs wish to arrange friendlies, the league would not stand in their way. However, clubs intending to do so must be mindful if the issues detailed above, on which we have asked the FA for urgent confirmation or clarification. The position with insurance will also be confirmed soonest.

2021/22 season – flexibility vs. costs
The leagues are now fully focused on ensuring that the fixture programme for season 2021/22 has sufficient flexibility to deal with further disruption by Covid-19 or any other factors.
The problem in contingency planning such as this does not lie in predicting fourth waves etc, but in trying to second guess the steps that government would put in place to mitigate the impacts.
The IL, SL and NPL are also very mindful of clubs’ reluctance to accept the financial implications of a significantly longer season simply to enable the league to be suspended at some point.
Repeated requests to the Football Association to provide wording for player contracts that would protect clubs in the event of fixture suspension, have been refused. The FA’s position is that clubs can insert whatever special clauses they wish but may not be supported in the event of a challenge.

2021/22 start and end dates.
Although the EFL is due to start its season on 31st July, the Trident Leagues believe that the 2021/22 league season should start either on 7th or 14th August. This allows for possible holidays taken by players and volunteers, but also pitch preparation.
The final decision will be made once the composition of the FA Cup extra preliminary round on 7th August is known.
Similarly, the Trident leagues intend to complete the league season at the end of April, with play-offs being staged over the Bank Holiday weekend, although we want to have the option to extend to 31st May if required.

Step 4 re-organisation
As the FA statement of Feb 24th states, the FA Alliance and Leagues committees are revisiting the topic of re-organisation at Steps 4-6. This will not extend to Step 2 because the National League does not currently wish to increase its existing club numbers.
This season, the NPL was due to have an additional division at Step 4 but implementation was delayed due to the pandemic. Step 5 leagues have indicated a willingness to progress the new step 4 division ahead of next season, and the practicalities are now being assessed in detail.
The biggest potential obstacle is finding a robust mechanism for promotion that does not open us or the FA to legal challenge.
Although some fans (and clubs) think this is simply a matter of waving a magic wand, recent (and ongoing) experiences of the National League show that, unless the mechanism stands up to scrutiny on several levels, we will have to wait until the 2022/23 season for the re-organisation to be implemented based on on-field playing results.
We are discussing multiple options, suggestions and proposals with the FA before the Alliance and Leagues committees can decide whether it will be viable to go ahead for next season. As soon as I have more information, I will share it with you.

Alternate competition
The Trident Leagues also want to include an alternate competition in NLS regulations for next season, to be implemented if the season cannot start or be completed in full.
The board of all three Trident Leagues favours the format detailed earlier in the season, namely, to split all Step 3 & 4 divisions in two to create smaller divisions of 10, 11 or 12 clubs depending on whether there is scope for every club to play each other home and away.
The precise details of the alternate competition will be worked up over the coming weeks so that clubs can have complete transparency on what will happen, and the circumstances needed to trigger such an alternate format.

Winter Survival Fund
When the application window closed last week, 92% of Step 3 and 4 clubs had successfully applied for £2.12m and £1.86m respectively.
I do not intend to re-visit the pros and cons of the WSF, which I covered in my last up-date. Suffice to say that Sport England declined to follow advice in setting the criteria, because they could not comprehend the main difference between non-elite football and other sports – the fact we pay players.
Roughly half of the total £14m fund has been allocated to date. Although we have requested that the remaining £7.2m be ringfenced for use later, I do not hold out much hope. There are constant calls for financial support from elsewhere in society so there is likely un-used funds will be taken
back by HM Treasury.
As always, I hope that you find the contents of this up-date useful. The FA is rightly cautious when issuing statements, which inevitably gives rise to further questions. I hope that I have been able to answer some of them.
If there is any aspect of the topics covered here, or any other NPL-related topic you wish to discuss, please e-mail, or phone me. 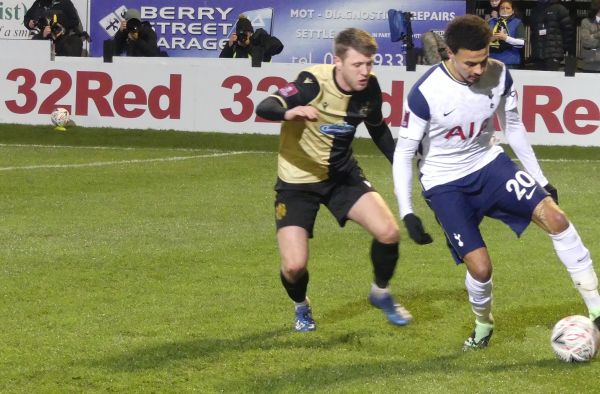 Tom Clarke reports as the Mariners' magical FA Cup journey comes to an end... Marine's historic run to the…