David Lynch’s extra time winner was enough to secure Marine a place in the Emirates FA Cup First Qualifying Round.

Captain Niall Cummins opened the scoring early in the game despite a promising start for the visiting Workington, who often threatened through Robert Bowman and Scott Allison in particular.

The goal came on the counterattack, with Ben Hughes carrying the ball half the length of the pitch down the right wing, before cutting the ball back to Owen Watkinson, who saw his effort spilled by the James Atkinson in goal, with Marine’s number nine following in.

One general pattern of the first half saw the visitors enjoy long spells of possession, with Brad Hubbold dictating much of the play, however the Mariners looked a constant threat on the break, with the pace and power of Hughes, Watkinson and Neil Kengni causing problems for the opposing defence.

Clear cut chances for either side were few and far between, but Kengni may consider himself unlucky to not find the back of the net, having struck the woodwork twice.

The biggest first half chance for Workington came two minutes before the interval, as the ball fell to Allison in space in the box, only for the forward to blaze his shot well over the bar.

With the score in Marine’s favour at the break, the Reds would have felt unlucky to find themselves a goal down, although Neil Young’s side had defended well to keep dangerous attacks to a minimum.

Just a few minutes into the second half and the home side could have had another. Hughes, who had moved over to the right flank, fired an inviting low cross towards the back post, with none of his attacking team mates able to get onto the end of it.

Workington’s equaliser came in the 59th minute following a moment of magic from Nic Evangelinos, who darted down the left wing before cutting in on his right foot and curling his effort into the top right corner. With the game starting to swing back in favour of Marine, Danny Grainger would have been grateful for his wingers strike on the hour mark.

As the game headed for the final whistle, both sides looked physically drained, having given their all especially in the midfield areas. Alex Doyle had made a number of huge challenges and denied two goals for the opposition, clearing off the line on both occasions.

After 180 minutes of football, the two sides could not be separated, following two 1-1 draws in the FA Cup Preliminary Round.

The tempo of the match had understandably decelerated, with players from both sides starting to feel the effects of a gruelling Tuesday night encounter. The likes of James Joyce, Watkinson and Doyle can be credited with their ironman engines that saw them continue to give 100% right up until the 120th minute.

The decisive moment of the match came just before half time in extra time, with substitute David Lynch connecting with left back Joyce’s cross on the volley, flying into the far corner. This goal sparked mass celebrations from the Mariners bench, with the reaction being matched in the stands.

Both sides enjoyed spells on top of the game, with Workington being made to rue missed chances throughout the match, however manager Neil Young will be pleased with the application and work rate of his team, as they now prepare for another encounter with the Cumbria side this Saturday. 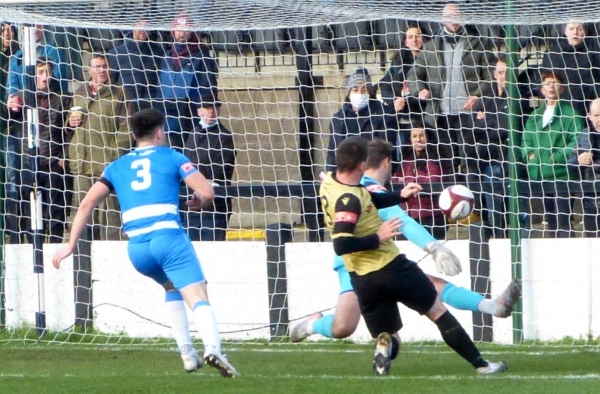