Marine suffered their first home league defeat of the season as Bootle ran out comfortable winners at the Marine Travel Arena.

A sell-out Christmas crowd at the MTA witnessed a depleted Marine squad, without six players due to injury or illness in addition to long-term absentees Anthony Miley and Germano Mendes, capitulate in a poor performance against a clinical Bootle outfit who are chasing a play-off place in the NPL West.

The visitors settle into their stride quickly and created the game’s first chances as the division’s leading scorer Hodkinson skipped away from James Barrigan, but his low cross-shot was blocked by the home defence.

Then, a high ball into the Marine area eventually fell to seasoned-striker Peterson whose shot was blocked by debutant Connor Teale in the heart of the Mariners’ defence.

The blue-shirted Mariners gradually found their way into the game and created two great chances to open the scoring.

Firstly, after Bootle had failed to clear their defensive lines Owen Watkinson found Ryan Wignall who turned onto his left foot just inside the box, however the midfielder’s shot was deflected behind by the outstretched leg of defender Cooper.

Watkinson and Wignall combined once more as the latter’s cross caused confusion in the visiting rearguard, Neil Kengni’s shot from six yards being foiled by another last-ditch block from a yellow-shirted defender.

However the Bucks responded well and should have taken a half-time lead as a corner from their left saw Bayleigh Passant miss his attempted punch clear, the ball falling to ex-Mariner Bell whose initial prod from six yards struck the upright before the centre-back somehow put the rebound over the Crosender crossbar with the goal gaping.

A tight first half shaded by the visitors ended goalless, with the home support among the capacity crowd expecting an improved second half showing from the Mariners.

However this failed to materialise, and after a short delay when one of the MTA floodlights failed, Bootle broke the deadlock in the 49th minute as Passant failed to hold a low drive from McDonald, Hodkinson firing home the rebound for his 16th league goal of the campaign.

Following another short delay as the same floodlight lamp failed, the game restarted with Marine seeking to level matters.

It was the visitors though who doubled their lead with a counter-attacking move, McDonald sliding the ball past the onrushing Passant from the edge of the box to the delight of the travelling support.

Watkinson and Mark Howarth made way for Niall Cummins and Lewis Reilly as Neil Young sought to spark new life into the Marine attack, but it was lights well and truly out for the Blues on 58 minutes following another Passant error.

On this occasion the young stopper attempted an ill-advised pass from his own area into midfield. The pass was never on with Peterson anticipating Passant’s intentions to intercept, before slipping the ball past the beleaguered ‘keeper to all but secure Bootle’s victory.

The Mariners sought to reduce the deficit and Reilly’s low first-time effort was well held by veteran ‘keeper McMillan, whose associates almost added a fourth goal in the closing stages. Substitute McGowan’s back-post header appeared suspiciously over the line before being clawed out by Passant, the officials sparing the Mariners further embarrassment by waving play on.

As it was, time elapsed as the Mariners ended a remarkable year in disappointing fashion, and they’ll look to bounce back at Prescot Cables on New Year’s Day. 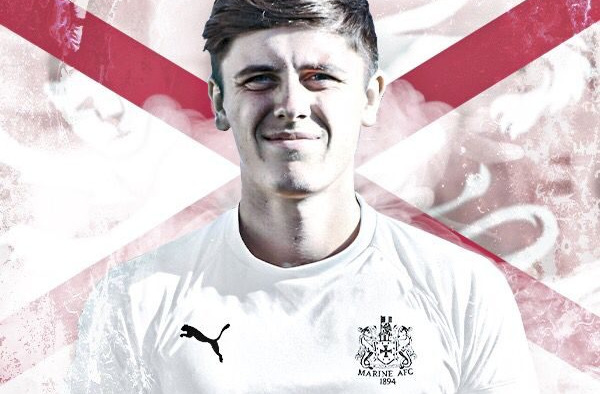 Sol set to shine for Mariners... Pitching In Northern Premier League Marine are delighted to announce the signing, on…

Marine intend to run a supporters' coach to our NPL Premier fixture at Lancaster City on Saturday 3rd December.…